In considering the interaction design of a social web application, it’s important to remember that expediency and efficiency are not always allies. Indeed, the laborious act of “adding a friend” or “creating a group” can become sacrosanct experiences in the course of the development of one’s online self… and tasks that should not be trivialized down to the data level.

Instead, these kinds of flows should be crafted and architected to be noticed as part of the network’s rituals: i.e. those behaviors and actions that occur regularly enough to give rise to a kind of life in the network. When you’re online, those actions and (notifications of like, the same) are the closest thing to respiration you can offer… and without some kind of active respiration system, you’re likely to be left for dead. 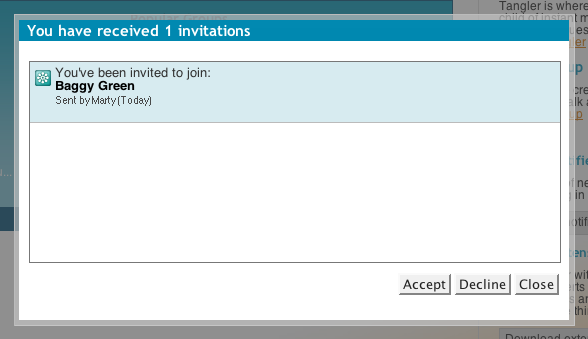 While on the surface this interface originally struck me as an efficient way to deal with a lot of group invitations, over time I’ve realized that it actually demeans the invitation acceptance ritual and that this design treats groups like commodities to be joined en masse, without much fore-thought, exploration or examination of the act about to be taken.

On the contrary, Flickr’s approach leaves the responsibility on the invitee to consider the validity of an invitation, and to explore the group before making a final decision to accept the invite.

In this sense, you’re forced to read through the invitation in isolation and apart from any other decision, allowing you the space to consider it and choose to act positively, negatively or to defer until later. Like email, should you choose not to act this invitation will simply fade into the caverns of your inbox, outside of your daily environment, and not begging to be addressed. In the Tangler example, on the other hand, not making a choice will leave a residue on the interaction experience, forcing you to repeatable reconsider an invitation every time you view this interface leading to an intuitive mental stress that will likely cause people to downright avoid checking their invitations after the first 10 or 15 stack up.

The reality is that these subtle decisions in the interface design will greatly affect how the life of your community takes shape — and what ritual behaviors will be enjoyed and looked forward to as opposed to those that will be avoided because the mental tax over time gets too high. This is an area that I’d like to think more on — and start to positively collect ritual experiences that I enjoy on the networks of which I’m happy to call myself a member.